I’m just about done processing the piles of notes and ideas that I brought back from Costa Rica last month. I’ve shared highlights from the beginning of the trip here, and my sense of balance won’t let me move on until I’ve shared a bit from the end, too.

So … after four days on a butterfly farm in Guanacaste, my traveling companions and I set out for San Jose, where we would help collect, sort, package, and ship butterfly pupae from farms around Costa Rica. We took the long way in to the capital, though, in order to see more of the country. I was happiest here:

That’s the volcano called Arenal, and I thoroughly enjoyed admiring it from the warm hot pools at its base. Thoroughly. I could have soaked there for days. Sadly, Ellen and Lea are CRAZY, and insisted that we dry off and go do this instead:

Oh, the stories I could tell! The pictures I could show! Zipling was absolutely the craziest thing I have ever done, and I struggled through every single moment of our eight zip descent. But I did it. And I think I remember a moment or two of pure exhilaration. (Okay, maybe it was only a few seconds. But I will remember them always.)

Once we were safely back in San Jose, I got to do things more my speed, like play with piles of pupae. Check it out:

Ellen and I have put together a book proposal based on the story we documented in Costa Rica. Here’s to catching the eye of a publisher with it!

So, what does one do when living on a butterfly farm? Well, if your planning to write a book about the experience, you try to melt into the background and watch what’s going on around you, popping up here and again to ask questions; you try things out when given the chance, and you take lots and lots of notes. That’s how I spent most of my time in Costa Rica.

Behind me in the image above you can see one of the seven greenhouses on the farm. Each was populated with several butterfly species in either the egg, caterpillar or adult life stage. Farm workers pass through the greenhouses three times each day: once to collect pre-pupal caterpillars, once to train plants and pull weeds, and a last time to hunt for the nasty critters who like to eat caterpillars. You know, giant grasshoppers, snails, bullet ants, rodents … and poisonous snakes.

We actually came across this snake while scouring property around the farm for wild butterflies. We were told it was a fer-de-lance, arguably the deadliest snake on the planet, and we wouldn’t have gone near it if it weren’t for the fact that it had been sliced nearly in half by a machete. Yes, the locals sometimes carry machetes. In case they run into snakes. Alrighty then.

For a science geek like me, meandering around the farm was fascinating. (Deadly snakes notwithstanding.) The fact that I was traveling with another science geek, Museum of Science butterfly curator Lea Morgan, and a science geek-in-training, photographer Ellen Harasimowicz, made the adventures all the more memorable. Here are some shots Ellen took of Lea and I studying a fearsome greenhouse caterpillar. Sorta reminds you of a snake, doesn’t he?

There was a lot to love about life on the farm: unexpected adventures, tropical climate (in February!), sleeping inside mosquito netting, an open-air office overlooking orange and banana trees, and, of course, the butterflies. There were a couple things that would have lost their charm had I stayed much longer: the complete absence of hot water, the critters (a lizard! a bat!) that kept visiting my room, the frightening things that the intense humidity did to my hair. All in all, though, I’d go back in a heartbeat.

I’m still typing trip notes and will likely have one more post of Costa Rica goodies to share … including near death experiences in the rainforest canopy. Stay tuned!

I’ve been home for days, actually, but unable to compose anything coherent about my trip to Costa Rica. It was an unforgettable adventure, an experience so rich with sensory details that I haven’t found a way to process them all yet. I’ve decided to start by sharing just one very small moment. Here it is:

Can you see the blue morpho caterpillars all over the leaves in the image? This is just one small branch of one small tree in a greenhouse full of trees. We are talking lots of caterpillars. It was the largest herd of caterpillars I have ever seen in one place. Their brilliant yellow bodies and hot pink hair tufts were stunning against the green leaves, especially as the sun set over the farm. Here’s a closer look:

I took photo after photo, none of which did the sight justice. Eventually I gave up, and opted for simply watching them. In this tiny moment of defeat–during which I finally stopped making noise with my camera shutter–I was treated to the most astonishing thing: the sound of hundreds of caterpillars feeding together.

Who even knew such a sound existed? Or that human ears could hear it?

But now that I do, I plan to remember it always. As with the photos, my literal descriptions don’t quite do the sound justice. It was a wet noise. Sharp, but in a whispery sort of way. Nippy. Insistent.

I have pages and pages of trip notes and interviews to read through and transcribe in the coming days. And a book proposal to write. With any luck I’ll find time to share more Costa Rican sights and sounds here, too. In the meanwhile, have a great week! 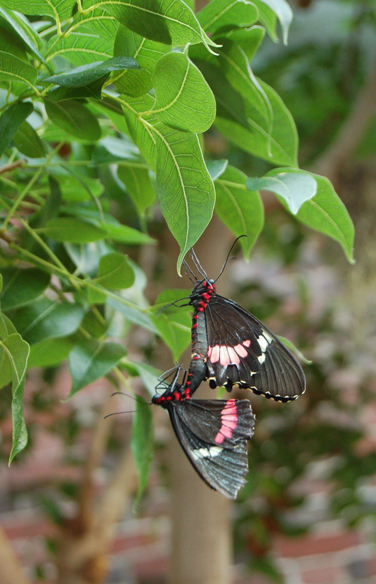 In the fall of 2008, I took my three kids to the Museum of Science in Boston to see the live butterfly exhibit. Although we go to the Museum fairly often, we’d never been to the Butterfly Garden, and, for one reason or another, we’d finally decided to go. It was a cool trip. I now look at that day as the one on which I began making my way to Costa Rica.

Well, it started with the butterflies in the picture up there. Yes, they are mating. No, I am not some sort of butterfly pervert. I’m just a naturally curious girl! I’d done a little poking around online before our visit, and I knew that most butterfly exhibitors were not allowed to breed butterflies. And, yet, here were two Transandean Cattlehearts (I didn’t now they were called that then) … brazenly breeding for my camera.

Well, I found me a Butterfly Garden Docent and pulled out my notebook. “What’s up with the mating butterflies?” I asked. “Isn’t that illegal?”

The Docent laughed, but in a very kind way. Then she explained that even though the butterflies were mating, the plant on which it relied for its larval food supply (that is, the only plant Transandean Cattleheart caterpillars could eat) was not growing in the garden. And so the female would most likely never lay her eggs. And if she did, they would be laid on a plant that could not support caterpillar growth. They could mate, but they would never produce a new generation of butterflies.

Every butterfly in that greenhouse had hatched from an egg on its natural host plant several weeks before … in Central America. They had lived their caterpillar lives there, and when they pupated, had been packaged up and mailed—by DHL, for crying out loud!—to the Museum. They were unpacked and incubated in a special behind-the-scenes laboratory, and when they finally emerged as adult butterflies, released into the garden for my kids and I to look at.

To this day, I find this astonishing.

So, on Monday, after more than a year of research and planning, I’m going on a little trip. I am going to live on a Costa Rican butterfly farm—one which supplies the Museum of Science with butterflies and which uses profits from those sales to preserve and protect the Costa Rican rainforest. I’m going to see with my own eyes how this amazing-ness unfolds. And when my camera is full and my notebooks are bulging and my head is ready to write, I’ll come home and begin the equally amazing process—at least to me—of sharing what I’ve seen.