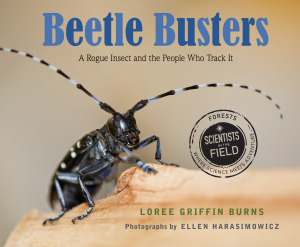 On Sunday, December 6 at 2pm, I’ll be speaking to an all-ages audience as part of the Duxbury Free Library’s Sunday Salon Series. The library is located at 77 Alden Street, Duxbury, Massachusetts and the event is free and open to the public … so come on down! I’ll be discussing Asian longhorned beetles and the men and women studying them here in Massachusetts. A book sale and signing will be held immediately following the presentation, thanks to Westwinds Bookshop.

Registration is required, so please visit the library’s web site for details. I hope to see you there!

In today’s installment of the Blog Hop, I’m going to answer a few questions about my newest writing project. I’m super excited to start talking about this book, because getting to this moment was–how shall I put this?–WICKED HARD. Of all the books I’ve written, this was the toughest to figure out. But I did, and soon you’ll be able to read it. Below are some questions about the project from the magnificent Sarah Albee, along with my answers. And if you’re confused about this Blog Hop business, just click on over to Part One of this post.

Sarah: What are you working on right now?

I’m working on a new Scientists in the Field book called BEETLE BUSTERS: A ROGUE INSECT AND THE PEOPLE WHO TRACK IT. It’s in design now, so I can’t show you the cover yet. (It doesn’t even exist!) But I can share the photos above, which are just a few of the scads of seriously cool images taken by Ellen Harasimowicz for this book.

Sarah Albee: Where did the idea for this book come from?

The subject —Asian longhorned beetles—found me, actually, and it wasn’t easy. Here’s a simplified version of what happened:

Sarah Albee: Why do you write what you do?

Because stories about our natural world and the people who explore it thrill me. And when I find a story that particularly intrigues me, I can’t rest until I’ve found a way to share it with like-minded people.

Sarah Albee: What is the hardest part about writing?

That there is a photo I recently took in my garden. The baskets are filled with turnips, under them sit the weeds I haven’t managed to clear yet and behind them the paste tomatoes desperately in need of staking. This garden is the number one reason I have not blogged much since May.

The number two reason? I’ve been working on finishing up this book.

The number three reason? I’ve been working on a new Scientists in the Field book.

I’d tell you more, but I’m working on a website update (it’ll coincide with the publication of these two books next year) and getting ready for our family vacation, too!

But sometime soon, when all these summer 2013 activities have been enjoyed to their fullest, I plan to share the details here. Until then, I hope you are having yourself a fabulously wild summer!

In the photo above, I’m actually holding a throw ball line as Dr. Maya Nehme, a scientist studying Asian longhorned beetles, works to maneuver a heavier rope into the canopy of a tree. Technically, Ellen and I were along to watch Dr. Nehme work, and to gather details for our upcoming book on these gnarly beetles and the damage they are causing here in North America. But there was a moment when Dr. Nehme needed an extra set of hands, and I was nearby. (Thank you, Ellen, for catching it on film!)

Aside from holding the occasional throw ball line, I spent the morning gathering tiny details that will help me describe fieldwork like this in the book. I was hunting for specifics: small ideas, surprising imagery, unusual sounds, things that hadn’t come up during the interview process but which might help make my text come alive for readers. Like the fact that each scientist had his or her own method for getting the throw ball up over a branch. (I saw an underhand toss, an overhand rocket, and a magnificently simple and effective between the legs heave. Who knew?)

And there was this: When you are hanging beetle traps from the branches of trees, you spend most of your time looking up. And do you know what happens when you walk around an urban forest all morning with your eyes looking up? You trip. A lot. I did it, and I saw the scientists do it, too. Nice detail.

My absolute favorite detail of the morning was this one: Before hanging a trap, scientists have to measure the trap tree’s diameter. No big deal, right? Someone simply unfurls a tape measure, wraps it around the trunk, and records the number. But if the tree being measured is just the right size, then recording its diameter requires one to hug the tree, to stretch both arms around the trunk while passing the tape measure from one hand to the other. The sight of a beetle scientist with his arms wrapped around a trunk was poignant and loaded with symbolism; don’t know if I’ll ever use that nugget of an image, but I am certainly glad to have stumbled across it.