It’s finally gardening season here in the northeastern US, and one of my favorite spring rituals has begun: watching for interesting plants that sprout up unannounced in my garden beds. Gardeners call these plants volunteers. Every year, volunteers show up in places I didn’t put them and don’t expect them to be. Sometimes they’re weeds whose seeds blew in from somewhere else in the neighborhood. Sometimes they’re plants I grew last season that managed to spread their seeds willy-nilly around the garden before I noticed. No matter how they arrived, they never disappoint.

This year, I’m particularly blessed with volunteer dill. Lots and lots and lots of it. I’m talking about a forest of dill. Which is cool, because I like dill. I’ll be chopping it and sprinkling it on salads and soups all summer long.  And I’ll dry some to sprinkle all winter, too. But the real reason the forest of dill thrills me? Some of my favorite butterflies adore it.

Late yesterday afternoon, my daughter and I spotted our first-of-the-year Eastern black swallowtail in the garden. It was female, and she was flying low over a patch of dill seedlings. We saw her alight here and there, a few milliseconds at a time. We tried to get a picture, but she didn’t stay still long enough for that. We had a good idea why she might be touching down so regularly, though. We watched and waited. Once she’d flown out of the garden for good, we got down on our hands and knees in the dill. And sure enough …

Do you see it? The yellow orb in the middle of the photo? That gift, for me, is the real joy of this year’s volunteer dill plants: I’ve got myself a nursery of Eastern black swallowtail butterfly eggs, right in the back yard! Let’s spend the next few months watching them, shall we? 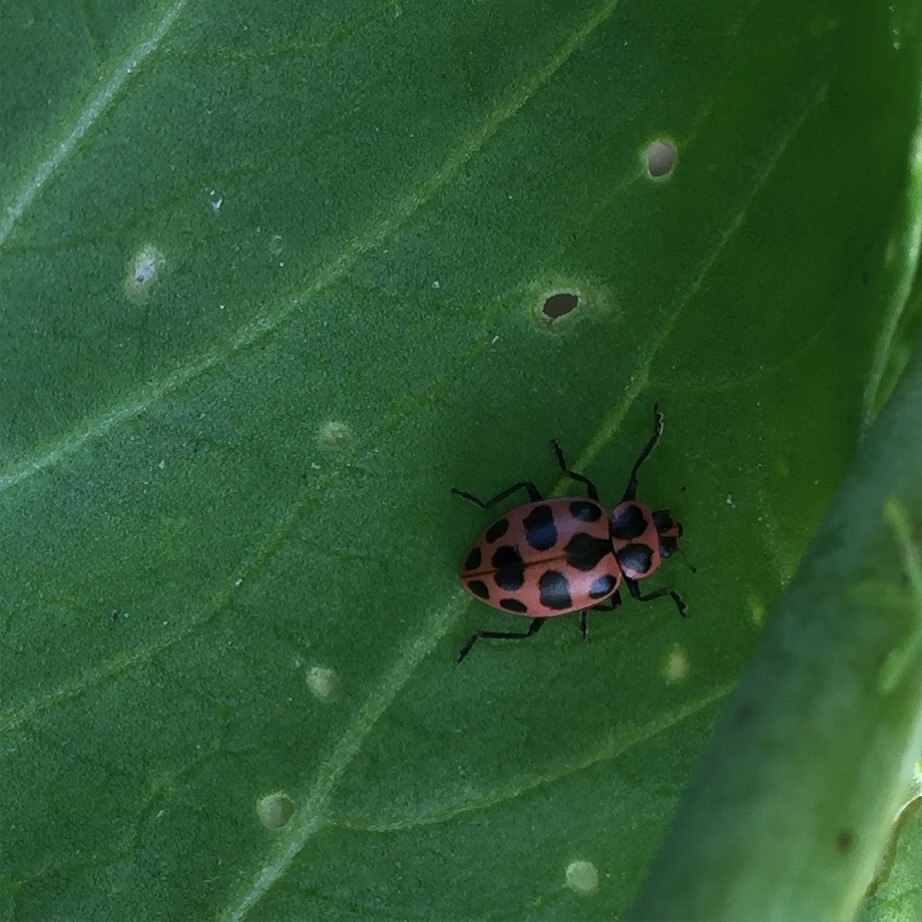 This gorgeous pink-spotted ladybug (Coleomegilla maculata) is the most recent species recorded in my vegetable garden, and it brings my 2016 species tally to five. This summer has been super full, though, and to be honest, all the ladybugs I’ve spotted have been by chance, while weeding or harvesting or doing other chores in the garden. There just hasn’t been time for a day in the meadow with my sweep net and a collecting jar and high ladybug hopes.

I’ve decided to change that by taking my very first social media vacation. A smacation, if you will.

I plan to spend the next few months writing, and gardening, and hanging out with my family. But I also plan to pull out my sweep net and see what ladybugs are living in our milkweed meadow these days. Things will be quieter than usual here on my blog, and on my Facebook, Twitter, and Instagram pages …  but I’ll be back soon. With any luck, I’ll have some new ladybug photos to share.

I’ve said it once and I’ll say it again: keeping honeybees is much harder than writing about them. In the year since I became a beekeeper, I’ve struggled to keep my very small apiary buzzing. I currently have two hives, but one of them is in trouble. It won’t live through the winter. (Lost its queen, began to dwindle, and is now infested with wax moths. Ugh.)

I’ve decided, though, to keep at it. I love what the hives are teaching me (patience, for one, but also the most amazing things about insect communities and the way they respond to the natural world around them). Also? I found a great message on my answering machine this week. It was from a neighbor, and it went something like this:

Hi, Loree! It’s Craig. I’m calling to tell you a funny story. I was at Ed’s house [note: Ed is another neighbor] over the weekend, and we were relaxing in his yard, and he said, ‘Craig, look at that apple tree. Would you believe that thing has not produced an apple in all the years I’ve lived here? Not one in a decade. And then, this year, BOOM! … apples. Isn’t it the strangest thing? I can’t explain it.’ To which I said, ‘I can: The Burnses keep honey bees now.’

I am proud of my bees. Theirs is not an easy lot, what with having hatched at the exact wrong time to be a honey bee on planet Earth, and, at the same time, being saddled with a fairly inept newbee keeper. Somehow, though, they’ve spent their tumultuous year at my place doing their thing: pollinating plants. I love them for that. I really do.

If you have the interest, I highly recommend you find a mentor beekeeper. Check out their hives. Learn the ropes. When you’re ready, start an apiary of your own. If those ideas feel overwhelming right now, listen to the TED Talk above by Marla Spivak, a honey bee researcher from Minnesota. She gives a great overview of the honey bee crisis, but ends her talk with some hopeful ideas and some really easy things that you can do to help the bees. And, in turn, beef up your neighborhood apple trees.

“Put on your veil, grab your hive tool, and light up your smoker … we’re going into a beehive.”

When I wrote those words to open THE HIVE DETECTIVES, I never, ever, ever thought I would say them out loud in my own backyard. But on Tuesday, with my daughter and her camera nearby, I did just that. And guess who was there to hear them?

Mary is the beekeeper who helped me introduce honey bees and hives and honey-making to readers in THE HIVE DETECTIVES. How fitting that she be the one to help me through my first hive inspection, patiently reminding me how to keep my smoker lit, how to use my hive tool properly, and how to stay calm when a honey bee landed on my veil. (I honestly couldn’t tell if it was on the outside or the inside.)

Oh, the places a book will bring you!

I had to pull out my trusty butterfly field guides in order to ID this fellow. See that white marking on the hind wing, the one that looks like a question mark on its side? That was the key.


On Sunday I watched this honey bee, most likely living in the hives my neighbors keep, work our sedum plants. In fact, it’s possible that I watched her collect nectar that will end up in my tea–in me!–come winter. Humbling.

Lotsa new on the old blog this week: new platform, new colors, new sidebars, new, new, new. Why not add a new feature? I have long been intrigued by the Wordless Wednesday posts seen here and there around the blogosphere, because photographs make me happy. But it turns out I’m not so good at the wordless part. (Shocking, I know.) Anyway, I’ve reworked the concept a bit. Welcome to my first Wednesday Wild post. A photo from somewhere in my wild world. A few words. A new weekly feature.

So … that there is a house wren, and it is raising a family in my garden. I’m not sure yet how many babies are in the birdhouse, but its enough to make a decent racket when they are hungry. I hid in a blind of sunflowers for forty-five minutes yesterday, listening to the squawk and taking pictures. They were some of the best minutes of the day.