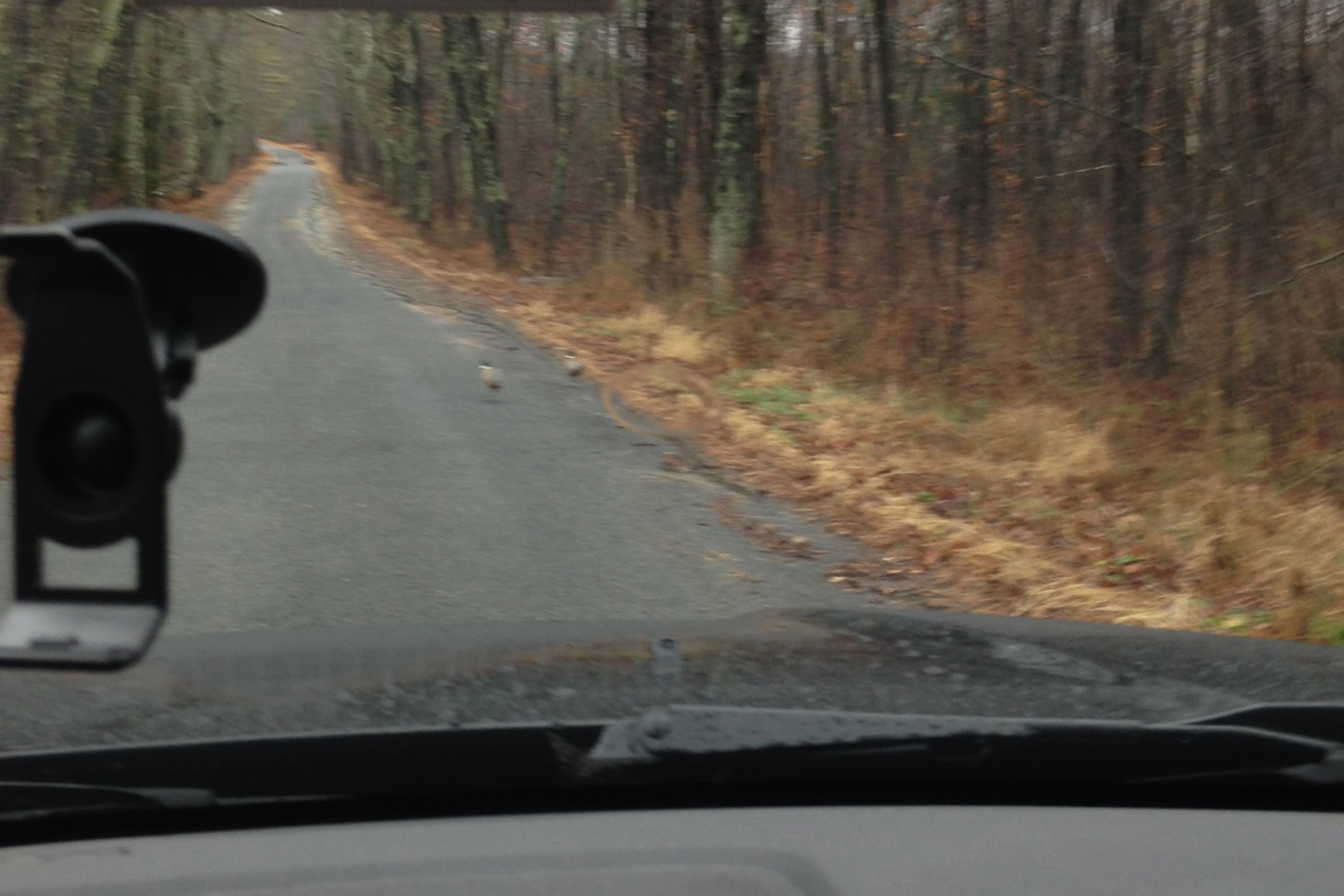 I can already hear you …

Yes. Yes I do. Because I did see two male ring-necked pheasants walking along the road. I did! And even thought I didn’t have my camera and it was pouring rain and I was in the car and my daughter had to take a couple shots through the car window using my cell phone … these pictures clearly show the only thing you need to remember about this post: ring-necked pheasants are worth seeing in the wild. 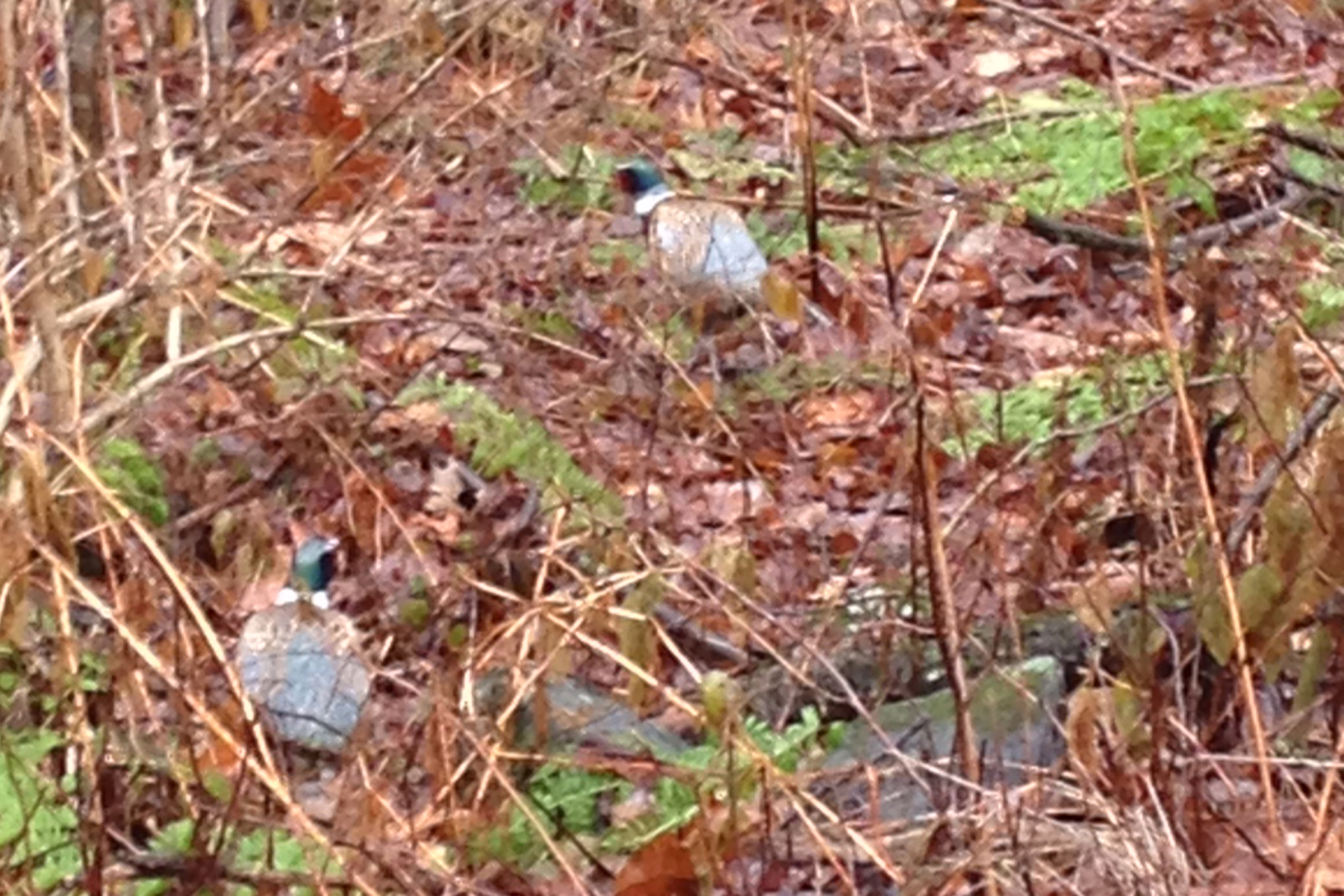 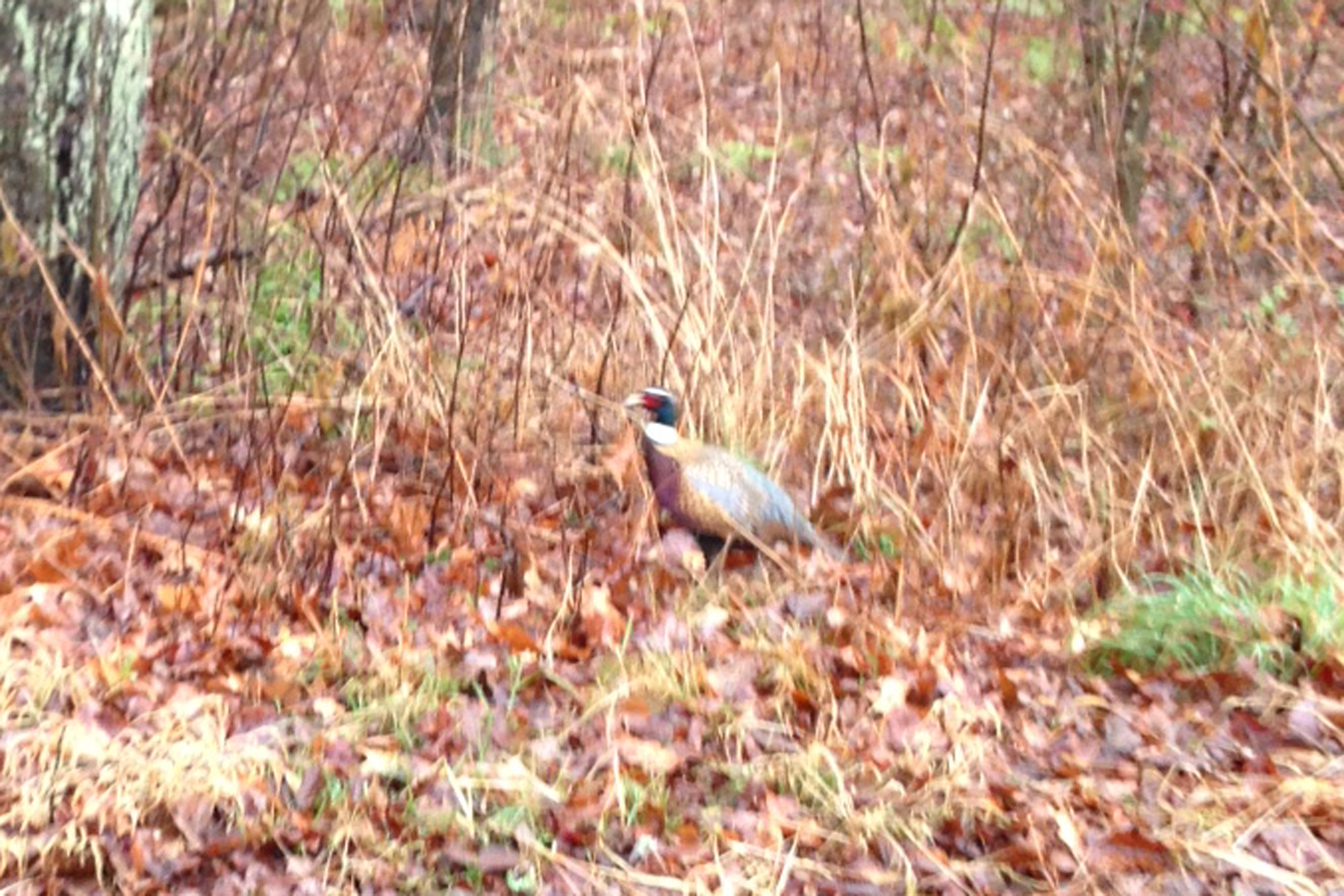 Have an adventure today. Bring your camera.

Can you see him? In the middle? Cute, no?

My daughter found this monster caterpillar in our yard, halfway between the grape vines and an apple tree. It was moving faster than you’d think a caterpillar could move in grass, but I managed to catch up for a photo. The markings (“cinnamon with pale white to yellow spots enveloping abdominal spiracles” and “generous peppering of minute black dots”) and the proximity of grape vines make us fairly confident it’s a Pandorus sphinx moth caterpillar. And since this particular cat had a button on its rear (instead of a “tin and coiled horn”) we’re pretty sure its in its final caterpillar stage. This explains its quick jaunt through the lawn: it was most likely searching for a safe place to pupate.

The Princeton Field Guide CATERPILLARS OF EASTERN NORTH AMERICA, from which quotes above were taken, suggested we throw a sheet on the ground beneath the grape vines, because then “the presence of hornworms will be revealed by an accumulation of elongate, deeply furrowed, fecal pellets.”

Honestly, who needs a TV?

Sometime during the 200-year history of this property, someone planted an herb garden. It’s a small, formal-looking space, with a geometric path centered around a stone bird bath. I love it, but have a tendency to let it go a bit wild. Instead of keeping the plants trimmed and bushy, I let them flower with abandon, go leggy, and take-over the little stone path. Why? Because the insects around here love those features. Honestly, at this time of summer, its more Insectarium than Herb Garden. And when I need a few minutes to center myself, I take my camera out there and watch the frenzy. That’s how I came to know the great black wasp. Brilliant blue iridescent wings (more butterfly, in color, than wasp) and the thin, wasp-y waist that gives me the chills. As if its looks weren’t interesting enough, great black wasps are apparently known for using tools and kleptoparasitism. What’s not to love?

I hope your Wednesday was sorta wild, too!

You may think the mourning dove is a sweet bird, gently-colored and cooing owl-like tragedies day and night. But this summer, I’ve learned the truth: mourning doves are berry marauders of incredible wiliness. This fellow managed to get into our blueberry patch even after we’d constructed a net monstrosity to keep him (and his very large extended family) out. We eventually had to stake the net all the way to the ground, securing it with ground staples every six inches or so.  We can barely get in ourselves, for crying out loud! And yet this guy finds a way in most mornings. He calmly devours every nearly-ripe berry he can get his beak on, and then waits not-so-patiently for me to let him out. On Sunday, I made him wait until I got a good picture. Maybe that’ll teach him?

I hope there was a little wild in your Wednesday …

It’s raining eggshells in central Massachusetts. These lovelies were collected over the past two days in various parts of our yard. There’s so much to see when you slow down and look …

This butterfly spent an hour fluttering around my garden last week. It’s certainly a duskywing, but to tell exactly which kind (Juvenal’s? Horace’s?) I’d need to get a closer look at parts of the wing I didn’t study when I had the chance. Drats.

I spotted this opossum about six weeks ago (3/21/13) in my backyard, where he spent several days living under our back porch and exploring the place. He snacked on birdseed every afternoon and I saw him check out the beehive once. While Mr. Burns was busy concocting plans for Operation Move Opossum (said plans involved staking out the under-porch den until the opossum left and then boarding up all the entrances), the target left of his own accord.

There are lots of reasons I admire the tree in the leftmost photo above, not the least of which is that it shades a lovely corner of our yard. When we moved here in December 2011 the tree had no leaves, so I wasn’t able to identify it.  But as soon as it put out its abundance of green, oval, toothed leaves, I became intrigued. They were pretty distinctive. See the picture up there in the middle? Notice how the base of the leave meets up with the petiole, the little leaf stem, unevenly? According to my memory–and later to my favorite field guide to trees–this was the leaf of the American elm tree.

Did you know that most of the American elms that once lived in the United States are now dead? They were killed by Dutch elm disease, a fungal affliction spread by elm bark beetles. It says all this in my field guide, and yet here was an American elm-ish tree, standing taller than our two-story roofline, holding up an ample canopy and a hammock.

I told Mr. Burns my suspicions last summer and asked him to keep an eye out for elm fruits. Within days, he brought me the small fruit pictured with the leaf, which he’d found while sweeping the patio under the tree. (Mr. Burns is an incessant patio sweeper. And he has good eyes.) The fruit verified my identification: our tree was a healthy American elm.

I’ve asked around, and people who should know tell me the tree is a fluke. It has avoided the plague so far, but probably by chance alone. It will surely contract the disease and, eventually, die of it. Just like the millions of other American elms that once grew here in Massachusetts. Maybe so. But until that happens, I plan to swing under it and admire the heck out of its sturdy limbs. I plan to press its leaves into books and against my cheek and send prayers to the botanical gods. I plan to lie in its shade as often as possible and dream healthy survivor dreams. And on spring days like today, I plan to believe those dreams might come true. Because today, as you can see in the rightmost photo, it is raining American elm fruits at my house. Pouring, actually.

…  a raccoon, most likely. All this snow in central Massachusetts makes for some good tracking.

Hope your day has a little wild in it!