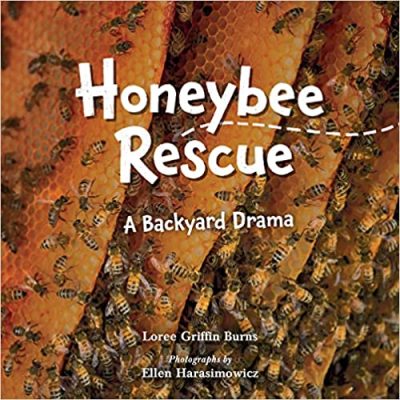 Beekeeper John Connery has a problem: a colony of honeybees have moved out of their backyard box hive and into his ramshackle garage. With a New England winter on the horizon, the bees aren’t likely to survive if they stay there. But how does one relocate 70,000 honeybees and their honeycomb? Enter Mr. Jon Nelson, bee rescuer. This is one backyard drama you don’t want to miss.

When Mr. Connery, a beekeeper, hears his garage buzzing and finds a colony of bees setting up housekeeping inside, he knows just what to do.

He calls Mr. Nelson, who arrives with his bee-vac, a special vacuum cleaner designed for exactly this situation. Mr. Nelson uses it to gently remove some 35,000 honeybees from the wax comb they’ve built in Mr. Connery’s garage and keep them safe while the two White men reconstitute the bees’ comb in a new hive for Mr. Connery’s garden. Burns, a beekeeper herself, describes the action in vivid, economical prose: “Vacuuming bees requires both patience and stamina.” She interlaces contextual information into her narrative, so readers learn why bees swarm, how they build their hives, and how Mr. Nelson’s bee-vac works even as they follow the riveting story. Harasimowicz’s crisp photos document the process clearly (that it plays out on a gorgeous summer day helps); occasional superimposed arrows with labels orient readers visually. Readers in beekeeping households will note some oversimplification that allows Burns to dive right in to the adventure, but her information is scrupulously accurate after that. They will also observe that Mr. Nelson works without a veil, a fact addressed in a closing Q&A. A glossary, sources, further reading, and acknowledgments round out the backmatter.

Both an excellent nonfiction adventure and a novel addition to honeybee lit. (Nonfiction. 6-10)