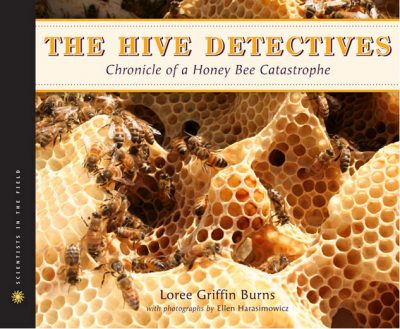 Without honey bees the world would be a very different place. There would be no honey, no beeswax, and—worst of all—barely a fruit, nut, or vegetable to eat. You can imagine beekeeper Dave Hackenburg’s horror, then, when he recently discovered twenty million of his buzzing charges had vanished without a trace. Those missing bees became the first reported casualties of a mysterious scourge that continues to plague honey bee populations today.

In The Hive Detectives Loree Griffin Burns profiles bee wranglers and bee scientists across the country who have been working to understand colony collapse disorder, or CCD: The Hackenburgs, who move their three thousand beehives from coast to coast in order to pollinate crops; Mary Duane, who raises bees and bottles blue ribbon honey; Dennis van Engelsdorp, Jeffrey Pettis, Diana Cox-Foster, and Maryann Frazier, who study bees from every possible angle in an attempt to discover what is killing them.

In this dramatic and enlightening chronicle of a modern honey bee catastrophe, readers explore the lives of the fuzzy, buzzing insects we ought to love … and join the human quest to save them.

Not long after beekeepers encountered a devastating new problem in their hives in 2006, a team of bee scientists began working to discover the causes of colony collapse disorder (CCD), now attributed to a combination of factors possibly including pesticides, nutrition, mites and viruses. Unusually for a “Scientists in the Field” book, the focus here is as much on the scientific question as the individual scientists. The central section describing the investigations of four members of the CCD working group is framed by chapters introducing a hobbyist beekeeper’s mechanics and methods and explaining the work of the commercial beekeeper who first discovered the problem. Mock notebook pages break up the narrative with biographies of the individual scientists, information about who and what can be found inside the hive and the features of bee bodies. An appendix adds varied fascinating facts about bees—again using the format of an illustrated research journal. Harasimowicz’s clear, beautifully reproduced photographs support and extend the text. Readers may be left wanting more but will be well served by this example of a scientific mystery still unsolved.

The author of Tracking Trash (2007), Burns now spotlights a “dream team” of scientists as they work to determine what is threatening bee colonies and (by extension) agriculture, which depends on bees for pollination. After following hobbyist beekeeper Mary Duane as she inspects her hives, the discussion turns to a commercial beekeeper who reported in 2006 that 20 million bees had vanished in a mysterious and deadly phenomenon now known as colony collapse disorder (CCD). Fully illustrated with excellent color photos, the clearly written text introduces four scientists and follows them from the field to their labs as they investigate possible causes of CCD: pesticides, viruses, bacteria, and pests such as mites. The book demonstrates the urgent need for answers, the challenges of the scientists’ ongoing research projects, and the importance of investigating a variety of possibilities. In the final pages, beekeeper Duane harvests honey from her healthy bees’ hives. Throughout the presentation, readers learn about the anatomy, development, and social behavior of honey bees, and observe the process of scientific investigation and its vital, real-world application. Appended are lists of recommended books, magazines, films, Web sites as well as a glossary and a source bibliography. A fascinating book from the Scientists in the Field series.— Carolyn Phelan

In 2006-2007, a sudden and unexplained drop in the number of honeybee colonies—a reduction of nearly forty percent of the total honeybee population in the United States—alarmed beekeepers and scientists alike. In yet another excellent entry in the series, Burns tells their story as a dramatic scientific mystery, carefully leading readers through the unfolding of the crisis and the attempts to solve it: from the initial collapses in the beekeeping industry, through the identification of possible causes and the careful scientific research that eliminated each individual cause (pests, virus, pesticide), to the current research collaborations as scientists still try to figure out what happened. Profiles of the beekeepers and scientists, details about bee types, anatomy, and honey making, and information about the important roles bees play in global food production are interspersed throughout the main text, along with gloriously crisp photographs of bees and people at work out in the field and inside scientific laboratories.— Danielle J. Ford

The Bulletin of the Center for Children’s Books, May 2010

This is a joint review of The Hive Detectives: Chronicle of a Honey Bee Catastrophe, by Loree Griffin Burns and Ellen Harasimowicz (Houghton Mifflin, 2010) and The Buzz on Bees: Why Are They Disappearing? By Shelley Rotner and Anne Woodhull (Holiday House, 2010).

Most people have heard something about the mysterious disappearance of large numbers of the country’s honeybees; now two books for young readers address the subject. Writing in the “Scientists in the Field” series, Burns starts with an explanation of beekeeping, and then goes on to explore the detective work involved in attempting to unravel—so far, without ultimate success—the mystery of what’s rendering close to a third of the American honeybee population vulnerable to lethal infections. Rotner, writing for slightly younger readers, focuses more specifically on the agricultural importance of honeybees, which operate as a key part of the industry by pollinating crucial crops, their hives being shipped around the country by their keepers as they’re needed in various regions and seasons. Each book sports a number of photographs, making for a visual entry to the topic. That helps lighten the scientific detail of Hive Detectives, though the narrative is written with thoughtful and accessible clarity in its own right. Buzz is more image than text at times, with some of the pictures merely attractive rather than genuinely relevant, and it’s also a little light on the actual disappearance question of the subtitle, but it’s still a useful introduction to the agricultural use of bees and the strange problem they’re facing. Ultimately, these complement each other more than overlap, and they not only explore the problem of hive collapse but usefully explain why it matters, a point that may involve youngsters who think of bees largely as a source of stings. Burns includes extensive back matter: a picture overview of kinds of bees, a glossary, materials for further study, a list of references, and an index; Rotner concludes with an overview of web resources (plus one book) and a list of fast facts. DS

The mystery of the vanishing honeybees began in the winter of 2006 when beekeeper Dave Hackenberg inspected 400 of his 3000 hives in Florida and discovered that 20 million bees had simply disappeared. He frantically alerted state bee inspectors and other beekeepers that there was some strange new ailment affecting these insects and asked for help in finding the cause. Soon beekeepers across the country were reporting similar catastrophes. Most of this lucid, fact-filled introduction focuses on the investigation into the problem, now known as “colony collapse disorder,” or CCD. Separate chapters cover each of four scientists’ line of research and describe their procedures, key tools, equipment, and findings. While no definitive cause for CCD has yet been found, the researchers theorize that the disorder is caused by a combination of the usual bee ailments, the chemicals used to treat them, and a new systemic pesticide employed by farmers. Other chapters include interviews with a hobbyist beekeeper and Hackenberg; they are packed with information on beekeeping and stress the importance of bees as pollinators. Special feature pages profile the scientists and describe the physical and behavioral characteristics of honeybees; hive construction; the making of honey, etc. Clear color photographs of beekeepers, scientists, equipment, close-ups of bees, hives, etc., complement the text on every page. Youngsters concerned with the environment will find this meticulously researched title a valuable resource.— Karey Wehner, formerly at San Francisco Public Library

“Well written, accurate, and extraordinary photography and design make this the book to have for kids and adults who want to know more about [bees] …”— Kim Flottum, Editor, Bee Culture

“This book is delicious!” — Dori from the Dayton Metro Library