I shared some citizen science stories with the Worcester County Beekeepers this past week, and got to catch up with one of my favorite hive detectives: Mary Duane. Long live the bees … and their keepers! 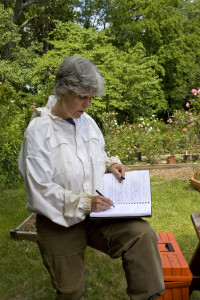 When I met Mary Duane, president of the Worcester County Beekeepers Association, I had no plans to include her in THE HIVE DETECTIVES. I was, however, super excited to take her up on her offer to show me around a box hive. Working with Mary in her bee yard was the perfect way to rest my brain as I puzzled my way through the writing of the THD manuscript.

And let me tell you, about halfway through the first draft, my brain needed a rest. I’d realized that the story I was telling—the story of Colony Collapse Disorder (CCD)—was hard to write about without using a lot of unusual bee terms, and defining all these terms was killing the dramatic tension I was trying to build. Also, the ending I was building up to was dire (maybe too dire?); I wasn’t sure how to temper this.

So I rested my brain while working bees with Mary. She taught me how to inspect a hive, how to find the queen, how to recognize the signs of a colony preparing to swarm, how life in the hive was tied to the weather and the bloom, how to collect honey. Over one spring, summer, and fall, I learned how to keep bees, and in the process—bonus of bonuses—I discovered the answer to my manuscript dilemmas: Mary herself.

By bringing readers into one of Mary’s hives at the very start of the book, I was able to introduce all those pesky bee terms. When they came up later, readers already knew what they meant and so they weren’t a distraction to the drama of the CCD story. And to balance that visit into Mary’s hives at the beginning, I decided to include a return trip at the end of the book; readers learned how to collect honey and got a sense that some bees—in particular, Mary’s bees—were doing all right, despite the mysterious scourge called CCD.

Thank you, Mary, for sharing your knowledge and your bees, and for not hesitating when I said,