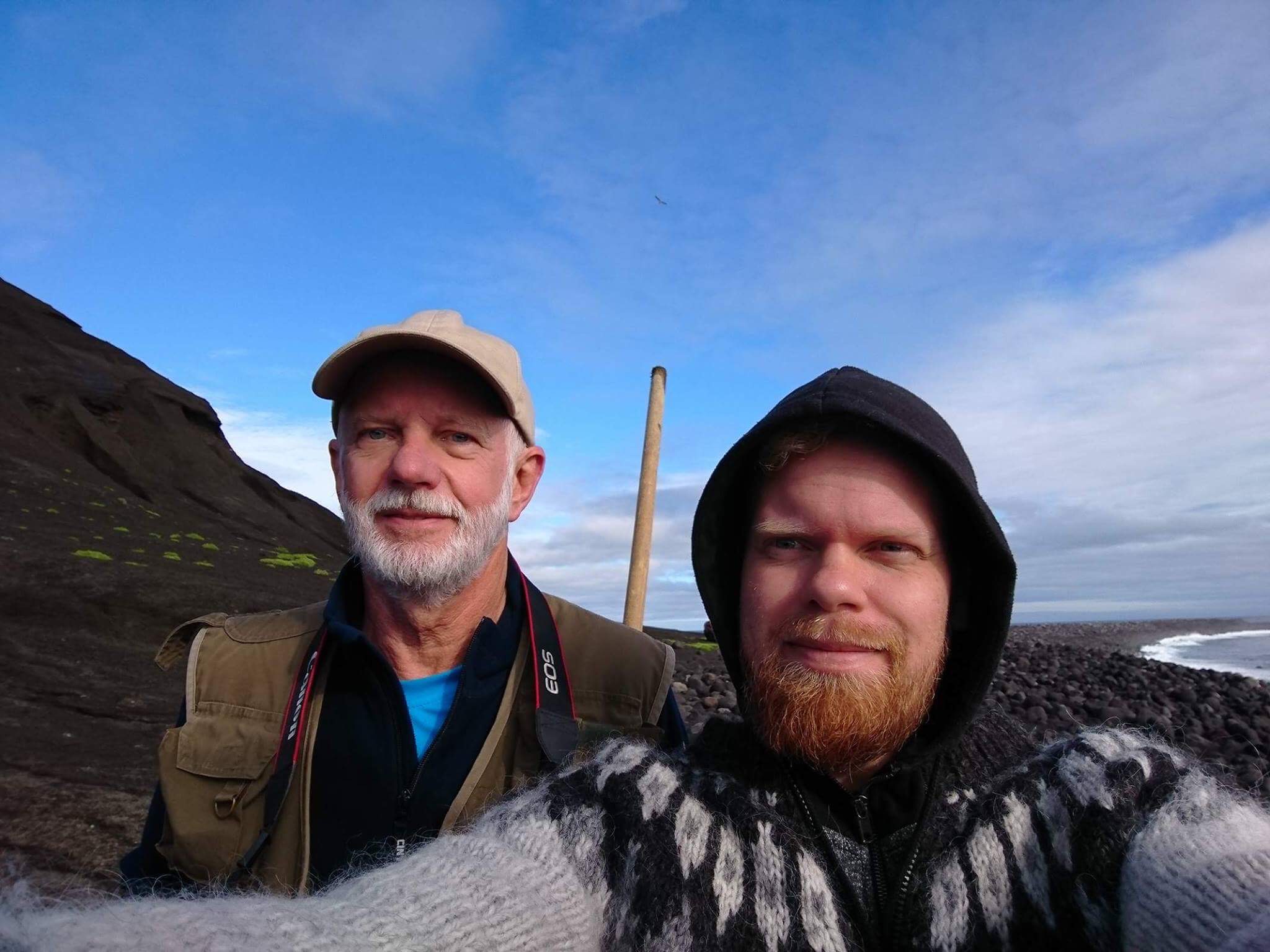 Last week, The Nature Generation, an organization dedicated to inspiring stewardship and the force behind the Green Earth Book Awards, invited me to be a guest on their blog. I wrote about the year my kids and I discovered our place in this world, and I hope you’ll hop on over to give my piece, The Art of Looking, a read. Please feel free to share it with anyone you think might enjoy it.

As if that weren’t exciting enough, the American Association for the Advancement of Science (AAAS) featured me on its Member Central blog. (!!) Click on over to read Laura Petersen’s profile of me and my work.

One last thing … the team of researchers I traveled to Surtsey with in the summer of 2015 was back on the island last week and two of them, Erling and Matthias, sent me the selfie above. These men truly have one of the coolest jobs on the planet. I can’t wait for you to read more about their work when LIFE ON SURTSEY is released in the fall. Stay tuned!

This year’s Burns family Great Backyard Bird Count event was not the usual well-planned affair. Scheduling conflicts kept me from holding the after school birding program I’ve run for the past four years, so there was not the usual gaggle of children to invite. And I’ve only hung a single feeder since our move, making it unlikely that many of our usual feathered visitors would show up either. I decided a small count, just me and my kids, was the best approach for this year.

But then a reporter from our local daily newspaper called and said she’d like to do an article on backyard birdwatching and my new book. She wanted to schedule an interview for Saturday afternoon, smack-dot in the middle of Great Backyard Bird Count weekend. When I mentioned this, she asked if she could bring along a photographer and collect images of me and the kids counting.

But that seemed sort of crazy. So many of our former bird counters are local kids, friends and neighbors we’ve known forever. The sort of people I could call last minute and say, “Please, please, please come over to my house on Saturday and help us count birds. There will be a reporter. And a photographer. And you guys are much cuter than I am!”

In the end, eight of us counted birds, talked to the reporter, and tried hard to pretend the man with the camera trained on us wasn’t there. It was a fun afternoon that will surely lead to a nice article. As a bonus, we recorded eight species of birds:

And as a bonus-bonus, five more species, recorded over the remainder of the weekend:

I’ll append a link to the article as soon as it runs. In the meanwhile, tell me: did you count birds this weekend? What did you see?

After a long and busy month of traveling and packing and moving and unpacking and celebrating and, truth be told, worrying about the work I was neglecting all the while, this morning I get back to work. I got up early, excited to begin, but was stopped short by this breathtaking sunrise. For me, it was a reminder to strive for balance. Work, yes, but enjoy beauty and family and all the rest, too. Every day. Somehow, some way, make room for all of it.

So I spent some time outside with my camera, had breakfast with the boys, walked the little miss to school. Had a cup of tea. And now, with a deep breath of gratitude for the many facets of this gorgeous morning, I’m ready to begin.

Have a wonderful Monday, friends.

Check. Out. That. Photo.

On the bottom: THE BEAK OF THE FINCH, the book that changed the way I think about sharing science and, quite possibly, the course of my scientific career. (I’m not kidding. I’d still be a lab rat had this book not crossed my desk back in 1995. Read it.)

On the top: my gorgeous, wholly original, and completely amazing new purse, made from an actual copy of THE BEAK OF THE FINCH* by the uber-talented Caitlin Phillips at Rebound Designs.

Have you ever seen anything so excellent in your life? I am the happiest book geek on the planet.

* Said copy was contributed by its kind and generous author, Jonathan Weiner, who took pity on a devoted fan who wanted a purse but couldn’t bear to give up her copy of his book. Thank you, Jonathan!

I am feeling less bitter about plastic bottles today, and more proud of the human race. Why? The Liter of Light initiative. Check it out:

Simple. Practical. Brilliant. A whole cut in the roof would allow the sun to shine into the room below in a direct line, ceiling to floor. By snugly inserting a plastic (glass would work too, I guess) bottle of water into that hole, however, the sunlight is refracted in all directions, illuminating the room with the strength of a 50 watt bulb. Bleach keeps algae from growing in the water, and allows the liter of light bulb to function for five to ten years without replacement.

How can you not love this? In these days of gloom and doom and worry and fear, a bit of inspiration.

(Many thanks to author Susan Taylor Brown, who posted this video on her Facebook page and, so, brightened my day.)

The bright side of all this snow on the ground in central Massachusetts is the ease with which one can, say, track a porcupine in the woods. The prickly fellow in the photo above, for example, lives behind our house, and we find him most afternoons perched thirty feet above the melting slush, chewing bark and branches in the sun. Seeing him reassures me that spring is on the way, although I don’t believe porcupines are generally considered harbingers of spring. (February in New England can make one see spring everywhere. This I know for sure.)

Other (equally dubious?) signs of spring ’round here include a sudden burst of online activity related to THE HIVE DETECTIVES:

I was a guest blogger at Cynsations yesterday; you can read my post and join the conversation about nonfiction genres here.

Mary Quattlebaum at Washington Parent compiled a nice list of books to help us all welcome the growing season and warmer weather, and she included THE HIVE DETECTIVES. You can her full list of titles here.

And Ricklibrarian posted this nice review at his blog.

“This experiment is important, because, as far as we know, no one in history (including adults) has done this experiment before.”

So say the twenty-five 8- to 10-year-old children from Blackawton Primary School in Devon, England, whose study of the bumble bee Bombus terrestris was published in the December 22, 2010 issue of the journal Biology Letters.

Their experiments are clever, their results are interesting, and their scientific report is delightful. I highly recommend you put your thinking cap on (its a fairly complicated experiment) and read it.

I love that the Blackawton teachers created an elementary science experience based on the simple idea that science is a game everyone can play. I admire the editors at Biology Letters, who acknowledged this idea in such a powerful way: by publishing their paper. And I adore the closing sentence of the paper itself: “Science is cool and fun because you get to do stuff that no one has ever done before.”